In 1955 I purchased my first metal  detector. I live on the Cold Harbor battlefield and as a young arrowhead hunter, I used to pick up minie balls and other Civil War relics while walking  the fields searching for arrowheads.  Well this relic hunting hobby grew into  a business while in high school and soon after I opened a Civil War Relic Shop. This was on the Cold Harbor battlefield tour route and
many tourists  would stop by. I began taking people from every state relic hunting, (and  even some from outside the U S.) Many, many
friends today were established from these relic hunts and I still take a lot of the same people hunting  today.  How I began casting buckles is a story of relic days. In 1966 a  tourist from Georgia stopped by and wanted to buy relics for resale in Atlanta.  In the trade deal he asked if I would be interested to learn the  casting process and cast reproduction civil war buckles. He had bought a hobby kit and lost interest but would give me a deal. So this was the beginning. You do not know how much time it takes and how many failures there are in the beginning. Well luck stopped by my relic shop on a battlefield  tour one day and wanted a personal tour for the family. Here
we go driving  along when he says I see you like foundry work. You have a lot to learn and I  am the guy that can show you how to cast many buckles at a time instead of one.  His name was Mr. Ludwig and he taught Foundry school in PA.  That day I  gave him a all day tour and a few relics I had found.  He said he would get  back down and show me some free schooling.  He did. The next weekend he came  down with foundry supplies and a special molding sand, that I still use today.  After many, many weeks of going to PA and he
coming to VA.  I was  beginning to learn a trade I could perfect from then until I retire. Then my  son Gary Jr. may continue the buckle business. He does the beautiful buckle finishing and the leather work. Thanks to Mr. Ludwig , who now lives in FL, I have customers all over the World.   Today I have  over 650 Civil War patterns and  cast a lot of button,  spurs and other period items. I also collect the original  belt plates and any other item I can. I have dug over 1800 US belt plates  from the battlefields since 1955.  In closing I would like to say that I still  love the business and will always give my customers the best product  anywhere.  If you are a collector be  careful when buying a original buckle.  All people have to do is ask me to see if it is one of mine. Thank all of you for the many years of business
and may we have many more.

Civil War Relic Hunting through the Years .  I began hunting in 1955 and began reproducting the original buckles I dug in 1967.
Left to Right - DIV Relic Hunt Gary Williams (GW); James Lyles talking to me about the day's relic hunt ( 1862 Seven Days Battle and 1864 Cold Harbor Battle six mile trench lines ran through his woods. I dug many of the relics displayed in my Cold Harbor museum from these trench lines). Pictured next is the Adams Farm. Mr. Adams' land joined Mr. Lyles.  I am digging in the field where the Confederate trench line was before it was filled in by the Adams for additional  crop field.  The 7th New York made a bloody charge up the hill and for a short  time over ran the Confederate trench. They did not keep this ground very long and along this six mile front 7000 Union soldiers fell in thirty minutes.  Next picture: GW and Steve Sylvia of "North South Trader" magazine at a DIV relic hunt.  Steve is the  original when it comes to civil war magazines.
This is a photo of my father's  store he established and operated for over fifty years (C. B.  Williams  Grocery). The front with the gas pumps are not in the picture.  He built a new store and I turned this into my Civil War Relic Shop in the 1960's.  It was on the battlefield tour highway and many, many people stopped to ask information and buy something to take home from Cold Harbor.  I also began my
buckle foundry business at this location in 1967.
1960's Richmond Times Dispatch newspaper
did  several  articles of my relic hunting adventures 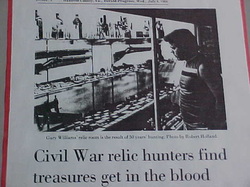 The Mechanicsville Local wrote an article in 1981  about my collection and relic room in my home.  Not long after this I opened the Cold Harbor Civil War Museum in Williamsburg, VA.

I always used the custom-made 38 inch search coil "Double Eagle" metal detector. The Cold Harbor trench is still three to
five feet tall and relics are deep.  I was the first to get the so called "deep seeker" and it was exactly the machine that you could dig belt plates waist  deep in the Cold Harbor sandy soil.  Herby Parham and John Robinson made me several  different types but always with the large search loop.  I have used this Double Eagle since the 1960's and in the photo below you can see the results of a day's  hunt with eight belt plates, canteen, bayonets and also bullets and buttons.  Even though it had the large search coil you could find small items that were also deep.  The last Double Eagle that was custom made for me is pictured on the right with a 22 inch search coil.  It is the machine I still use today.  The Fisher T-10 that I first used in 1955 looked like a toy beside the Double Eagle.  Another great machine in 1960 was the MetroTech.

What the relic hunters call "the good old days."  In 1979 I dug five eagle breast plates  and three US belt plates, one Enfield bayonet, couple bullets in wood, mess knife, grape shot, uniform buttons, broken bayonet,  bullets and a very rare shot canteen.  All this dug in one day from the Cold Harbor battlefield area.  The most buckles and plates in one day, 1960's was forty nine (49) in a Cold Harbor trench with my first "Double Eagle deep seeker".  Photo on the right shows how many bullets that the black container in picture could hold. I had one container on each side of my front steps.  Photo in the center above is a page from my ledger that I kept of each day's relic hunt.  I always kept a ledger from the old days and still keep one today.  This is a page from the ledger that adds up my items dug from
June 12, 1969 - May 31,  1972.  Note the number of bullets dug in three years:  28,435.  This was back when I dug just about every day. Mike O'Donnell, author of many civil war books and relic hunter, now has my ledgers.
Pictured to the left is my daughter, Presley, digging in a hut site at a DIV dig.  The three Read shells, cannon primers, Louisiana button and bullets came from the Confederate horseshoe trench.  Relics are still coming from the confederate horseshoe trench at Cold Harbor.   Confederate frame buckle, U S buckle, U S box plate, ram-rod, two bayonets,  remains of a enfield bayonet scabbard, remains of leather cartridge box, burnside cartridge, and many bullets.  All this is from the confederate trench and very deep.  A very good two day hunt in Feb. 2009.
Carnival of Blood by Robert Keating is a good book about the 7th New York Heavy Artillery.  He writes detailed information about  various battles they fought while my favorite section is June 3rd, 1864 Cold Harbor.  I walked the trenches with Mr. Keating looking for the horseshoe trench dug by the Confederates.  He thought this trench was near the center of the Confederate lines but I knew this  horseshoe trench was on the Adam's farm.  I dug many relics from this trench line.  The 7th New York Heavy Artillery was used as infantry and made the charge that took this horseshoe trench for a short time. The book gives great detail of the battle and life in the trenches and rifle pits after the June 3rd battle at  Cold Harbor, where 7000 fell that day.  The picture on the right is a 1864 period
drawing of the horseshoe trench.
On June 3, 1864 (2ndCold Harbor) Grant sent his Army across open fields to attack the well-fortified Confederate trench line. 7000 Union soldiers fell in a quarter hour. From left to right:  The 2nd photo above on the right is from civil war archives and shows the gruesome results of that charge.  The 3rd photo to the right, taken 2008, is GW and John McAden, relic hunting on this site.  In the 4th photo is Charles Burnette digging in the Confederate trench line that the first photo (1864  Alfred P. Waud battle drawing) shows, which is Barlow and the 7th NewYork charging and capturing a cannon. They did not keep this cannon very long.  Part of these six- mile trench lines cross my residential property.

Photo on the left is the May 1862 Grapevine Bridge crossing the Chickahominy River. Temporary bridge during the Seven Days
Battle (1st Cold Harbor).  After the Union army crossed the bridge they burned it. The center photo is a beam from this original Grapevine Bridge, now my mantle piece.  You can still see the burn marks in the beam.  Also, there are several minnie balls embedded in the wood.  This crossing is in sight of my home. The photo on the right is how it looks today. On the bottom left you can see the original road.  It was near this site in 1954 that I found my very first belt plate:  an OVM (Ohio Vol. Militia).  This sparked a life-long passion.

Relic Hunters and Dug Relics
Many of my reproduction buckles are cast from originals I (Gary Williams) dug  from the Cold Harbor and other battlefields.  Not a day went by that I was on  some battlefield or campsite digging relics.  1955, just eleven years old with many battlefields and campsites to myself.  The new relic hunters just don't know  what it was like to be the first in one on these sites.  Hunted just about everyday and a waiting list of some of the well- known authors, historians and people who just wanted the adventure to dig a relic. DuBose, Dickey, Mullinax, O'Donnell, Gavin, Kerksis, Mason,  authors, collectors and many others.  I slacked off digging a little in 2000. Retired but reproduction business is good.  My reproductions comes from someone who has walked the walk and truly loves the history.  First reproduction buckle casting  1967.

Two of my favorite relics I dug from the Cold Harbor battlefield and displayed in my Cold Harbor  Civil War Museum from
1982-2001.  Above left is a shot eagle breast plate, Right is a shot union canteen.  Both were dug from the main union trench line and these were shot during the fighting June 3rd,  1864.  Whoever wore the eagle plate and that canteen probably did not live
to see another day. Shot items are very rare.
Ammo box with 1000 minie balls that I dug from a wet area on the Cold Harbor, VA  battlefield.  Historic site marker explains why so many relics are retrieved from this area.  All the relics that I dug are from private property with the land owner's permission.

Back To Top
Attention Legal Notice: All Right Reserved. No image or information may be copied, saved or used in any other manner than to view it on this website without written permission of owner.  Protected Copyright 1967-2021.